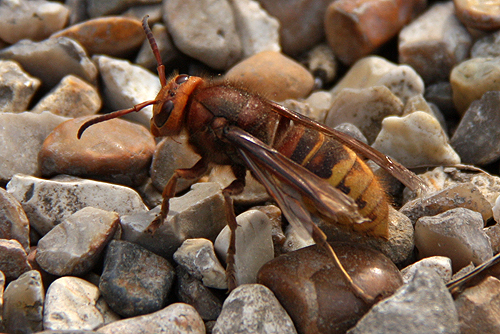 Yikes! This monster of a hornet was waiting for us on our driveway when we got home this afternoon… it’s no exaggeration to say it was at least the size of a family-sized caravan and twice as dangerous as a great white shark!!! (Or maybe the other way around???)

Erm, no. This poor old beastie was actually rather placid. In fact hornets are less aggressive than many more frequently encountered wasp species, and they generally only sting in defence or when picked up. And in spite of the fact that they are 4-5x larger than a wasp, their sting is no more painful than their smaller cousin’s.

You’ll be pleased to hear that Harry the Hornet is alive and well.

The only problem is he’s moved since we last saw him!