Just south of Cocking, tucked out of sight beside the A286 is an old Limeworks and Brickworks dating back to the 1830s.

The works was abandoned in the late 1990s but the site remains pretty much intact. To look around you’ll need to climb though a collapsed fence with a sign stating ‘Danger Keep Out’ (I only noticed the sign on the way out) but once inside it’s incredible. The site is pretty much as it was on the day it was abandoned; a lorry parked up, desks and furniture in offices, storerooms and machine rooms, conveyor belts and pallets of lime…

In its final years the limeworks produced lime and chalk for agriculture and nurseries called ‘Calco’ and ‘Nurslim’. The lime and chalk was extracted from the quarry at the top of the hill and then processed through various crushers before being milled and fired in one of the eight huge lime kilns built into the side of a quarry dating back two or three centuries. 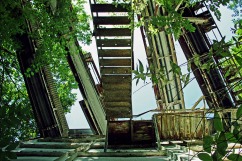 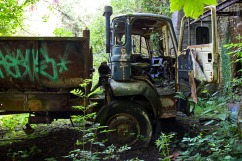 Nature is taking over Cocking limeworks; it’s a delightful juxtaposition between dereliction and regeneration, and well worth a nosey-around if you can.

Here’s a plan of the site from a website called The Derelict Miscellany:

Cocking Limeworks is just south of the village of Cocking in West Sussex, hidden in the woods on the left hand side of the A286. There’s no parking.

And a very good description of how the limeworks operated can be found here.